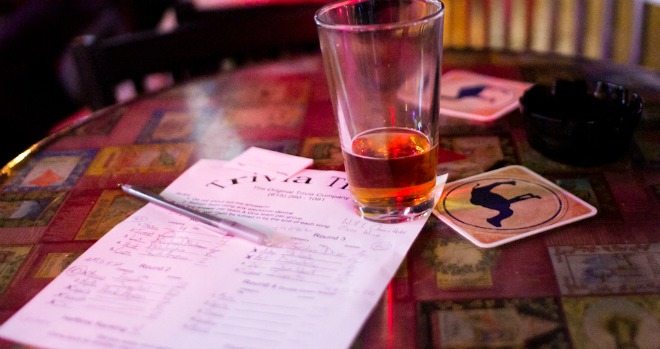 Looking for a date night that involves some mental stimulation and some friendly competition? Orlando is home to a wide variety of restaurants, pubs, bars and lounges hosting trivia. Here’s where to play bar trivia in Orlando every day of the week!

Orlando’s most established trivia team, Earth Trivia sends its trivia aficionados to locations across the city each week. Games are usually played in two or three rounds, each with ten questions and varying topics from sports to history to current events. These games are expertly prepared and wonderfully hosted. Earth Trivia was voted as “Best Trivia in Orlando” in the Orlando Weekly’s Best of Orlando 2016 reader’s poll.

Tasty Trivia has been around since 2011, providing fun trivia entertainment to many local Orlandoans. The locations they host at range from East Orlando to Winter Springs to Downtown to Lake Nona. They have also expanded to parts of Tampa. The company was started by UCF students and has boomed within the last couple years.

Looking for a nerdy night out? Nerdgasm Trivia hosts regular trivia nights at local bars dripping in comic and nerd culture. While there is a general nerd trivia night, most events are focused on a specific theme, such as Jurassic Park, Harry Potter, Lord of the Rings, Star Wars and more! Celebrate your fandom and stretch your knowledge by joining in on this unique spin on trivia night.

Every Tuesday at 8pm at The Parkview (836 S Park Ave, Winter Park) is trivia night. It’s been about a year since this cozy wine bar launched their weekly trivia night, and since then it’s morphed into a lively weeknight event. While you’re playing, sip something from the extensive wine and craft beer list, and enjoy bites from the full food menu. Trivia is played in four rounds ranging in topics from science and pop culture to music and history. The winning team earns bragging rights plus a prize pack and gift card. Bonus: select wines and beer on tap are on special for $5 during trivia.

Drink and think every Wednesday at 8pm at Hourglass Brewing during the weekly trivia night hosted by Manuel Dadee. This brewery in Longwood is known for its excellent lineup of sour beers and funky atmosphere, frequently hosting themed art shows and comedy nights. Plus, it’s connected to a taco shop, Wako Taco, for a complete date night of tacos, trivia and craft beer. Check out their Facebook page for upcoming trivia nights.

This new Smartphone Trivia app is a total game-changer for classic trivia nights.  Here’s how it works: players at participating locations can log into the app for two 1-hour games every Tuesday night at 7:00 and 8:00 pm.  Winners receive cash rewards via PayPal at the end of each round.  There are currently 5 local locations to play, with more coming soon: City Limits Taproom in Deland, Decker’s Lake House Grill in Lake Helen, Nice n’ Easy Oyster Bar in Orange City, Artisan Lounge in Deland, and Dizzy D’s Bar in Deltona.  Be sure to check out their official website and their Facebook for more details.

Every Tuesday from 6-7pm, Top Shelf Trivia hosts two rounds of trivia – a perfect way to kill time while you wait for rush hour to end!  There are fun prizes for winners, as well as random giveaways throughout the event.  Á La Cart also offers discounts on Blue Point drafts during trivia (they sponsor the event!).  We always recommend arriving early, as Á La Cart gets pretty crowded.  Check out the event Facebook page for details and updates.

3 Responses to “22 Places to Play Bar Trivia in Orlando”